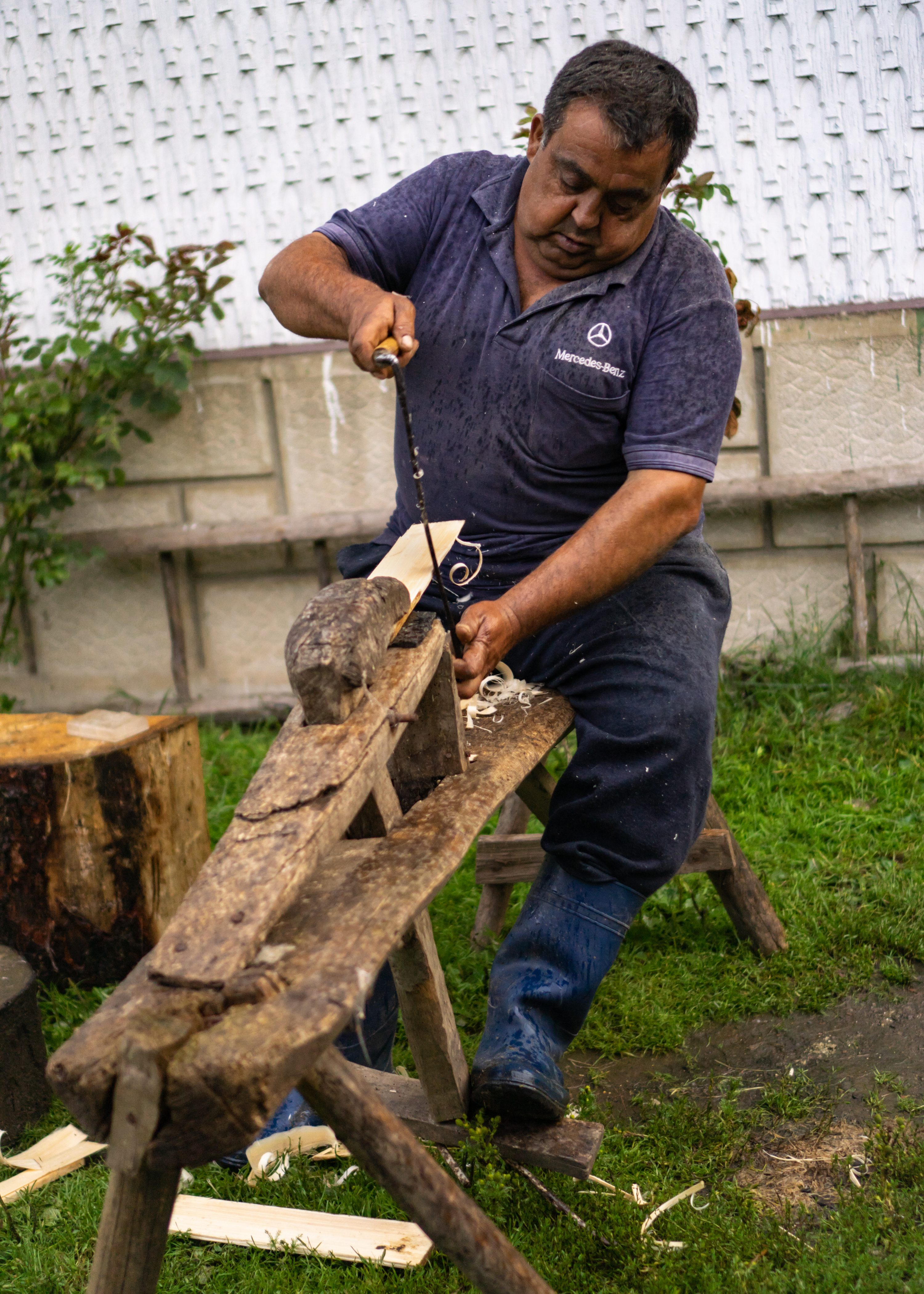 In the Bran-Moieciu area, only a few of the recently built buildings have roofs or outer walls covered with shingles, that is, with thin and rectangular flat wooden tiles, with one narrowed and dovetailed end (they are usually made of fir or spruce, and the usual dimensions are length 300 – 500 mm, width 10 – 15 mm and thickness 5-7 mm). Nea Nelu (Ion Preda), a craftsman from Moeciul de Sus, links the gradual disappearance of this type of covering with the aesthetic mismatch between wood and brick, stone and cement, the materials now being used in construction: „these houses, these big blocks do not look good with shingles. Once there is brick and there is no wood, the shingles don’t look good, they cannot look good. Now they want corrugated iron roofs.” Although the covering of the houses with shingles is specific to the mountain areas, in the new architecture wood is mainly used for balconies and interiors. Shingles are still used to cover smaller and older buildings, rustic guesthouses and ethnographic museums.

A shingle covering lasts up to 30 years, depending on the quality of the wood and of the manual labour. The same craftsman, Nea Nelu, uses only the wood from trees that are cut between October and February, months when they are no longer in vegetation and their wood is so stronger. Ideally, these trees grew on the peaks of the mountains. As he points out, „the harder the tree strives to grow, the harder and better the wood.” Ideally, again, the trees are cut during the days when the moon wanes, because the number of xylophage insects decreases then and their wood is better. Nea Nelu buys the wood from the local sawmills, so there is no way to check if these rules are being respected. His main preoccupation is to study the growth rings (the frequent the growth rings, the harder the wood) and to choose wood without knots and knobs, so that it will „split nicely along the fiber.”

The shingles are split manually through the gradual halving of the wood, from the log to the thin and finely cut flat tiles, as fine as „paper sheets”, with the help of various tools (Nea Nelu calls his tools “cuțitoaie”, “bardă”, “măiuc” și “lup”) and through the skillful movement of hands and legs. The shingles are well cut if, by putting them together, the piece of wood from which they were split can be rebuild. They are fixed in horizontal layers, each layer covering much of the one before it (according to Nea Nelu, „the thinner the shingle, the better it sits on the house”; the most resistant covering is made of three layers of shingles for each row). To enhance their durability, these thin tiles are lacquered with linseed oil.

In 2018, in Moiecul de Sus, only a few people make and assemble shingles. One of them is Nea Nelu. Thirty years ago, he stole the craft from a relative from his native village, a man who learned this trade at Rucăr, a center famous for his  shingle-makers. In his words:

I began to build a stable in my courtyard. I had shingles somebody made and started to fix them on the roof. Oh, bugger, how hard can it be? This is not engineering. Anything can be learned…Well, one doesn’t learn a craft, he rather steals it. I have a relative here in the village, Gheorghe Robu, a shingle-maker, and I go to him. <Hey, Nea Robu, can you give me shingles? I need so many square meters.> I made some calculations. <Oh>, I told myself, <this is a bit expensive!> I better learn to make shingles myself. I observed him spliting shingles, I came home, took the log, cracked it like he did. And so I started to make shingles. It worked and it didn’t work. I succeeded and I failed. This is how the first day went by. The next day was better. The third day even better. I visited my relative one more time […] I think he realised what I was up to. He made a few tiles, noticed that I paid attention so he stopped. But I already got the most. Things were pretty clear. I realised where I was doing wrong. I initially didn’t get the basic element, that is, one uses his legs as well when making shingles. At first I was only using my hands. […] With this [knee] you push. When you see your tile spliting less straightforward as it should be, leaning on the right side, you have to push with the left knee. Otherwise it won’t be as thin and straight as a paper sheet […] I came home and started to work the wood using both hands and legs  and saw that it really worked, moving my legs like that. <Oh, here it is!> And that’s how I learned it.

On a full day, Nea Nelu makes about 10 square metres of shingles, that is, about 2500 pieces. He works alone, but needs help when he fixes the tiles on the walls or roofs, so he is accompanied by either his wife or a young man, a former apprentice he taught how to make and mount shingles. In total, he had four apprentices, but three of them gave up definitively this craft, and the fourth one works with him only occasionally, the constructions being a more lucrative sector for him than shingle-making and mounting. Nea Nelu tried but failed to persuade young people to learn and practice this craft. He insists that his own harshness might play a role as well:

I think I’m a bit tough and stern. If the apprentice didn’t move his hands the way he should have done, I would slap him. Well, don’t think that I would slap him hardly! <Hey, learn that you don’t hold your hand well. And mind that the leg should be in this position.> And he would say: <Hey, don’t hit me!> <I don’t hit you, I actually teach you.> And that’s it. They don’t learn anymore […] They don’t want. It’s better to stay with your eyes in your phone, on the internet. I’ve lost many contracts […] At Bran Castle we did half of the work, after that we didn’t have people to help us, we had no way to continue the work.

He himself did not encourage his son to learn this craft:

I don’t even ask my son to do this kind of work! So he won’t have to climb houses like his father. Do you think it’s that easy? I for one like it! Until I die, until I get into the pit, I would do it! If I didn’t like it, I wouldn’t do it. I said to myself spring <This is enough, I stop, I won’t do it anymore.> But my heart still doesn’t let me give up!

In recent years, Nea Nelu has mounted shingles – “beaten up” – in the villages of Şirnea, Fundata, Peștera and Şimon, in Bran, Vâlcea and Ploieşti, on ethnographic museums in Braşov and Săcele and at a Romanian restaurant in Spain. He also worked on the reconstruction of the Bran Castle’s roof and the roof of the touristic sheepfold at Villa Bran.