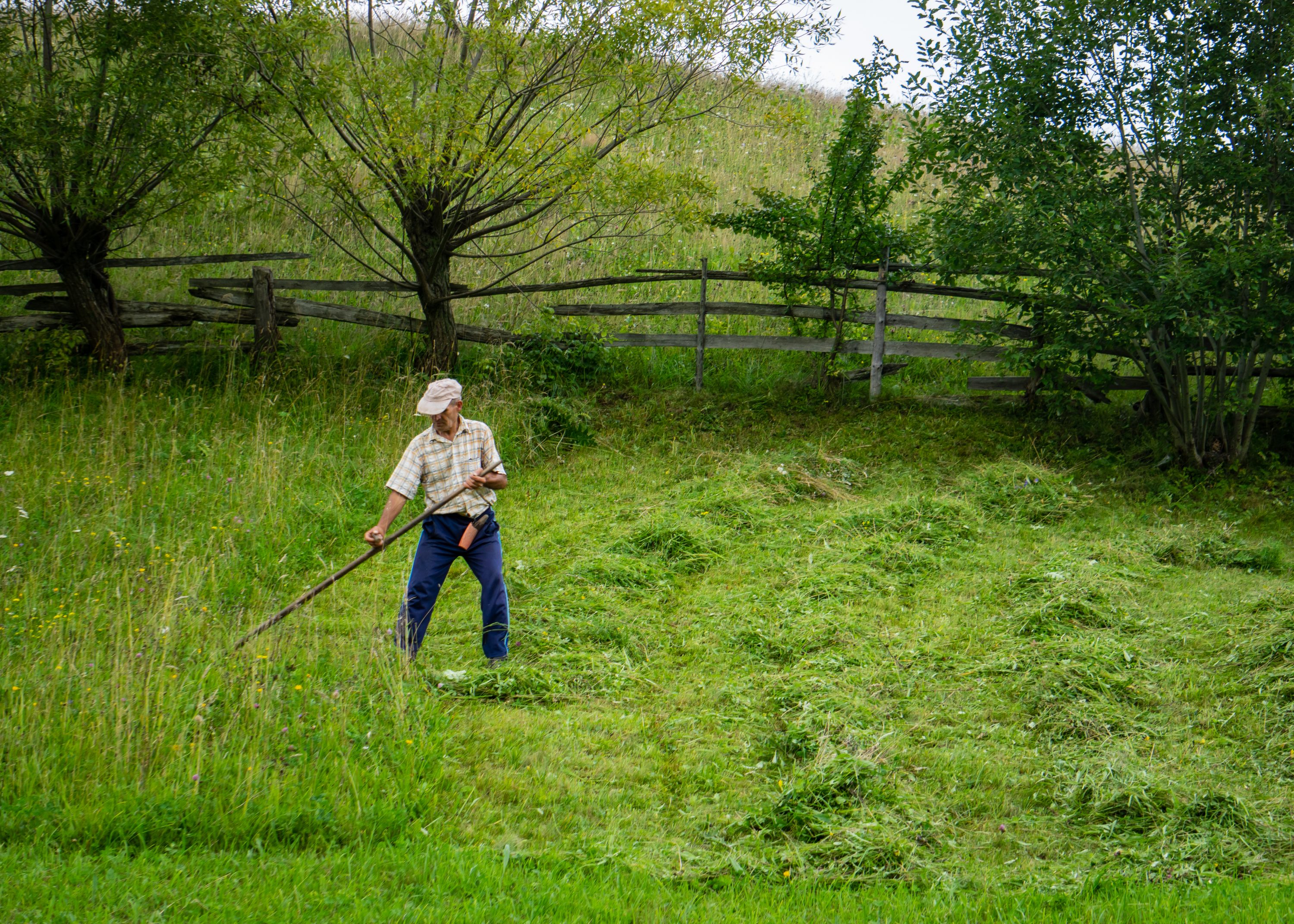 In the Bran-Moieciu area, social and economic life revolves to a great extent around haymaking. One day, as she was out scything, Maria Pepene (Pepenica) told us about a strip of land belonging to her neighbours where the grass was left uncut for several years because scything was expensive “and it’s better for them to buy hay than to pay a mower”. Whoever doesn’t have cows, will sell the hay. “In Moieciu there aren’t many cases – only seldom. Everybody has cows. If I, at 80 years of age, have three, the young ones should have ten.”

In order to dry, hay must be siripit (scattered),and locals are relentless in this endeavour. During rainy summers, they eagerly wait for any sunny interval and they are unabated in making the round trips from their village up to the hills, where their pastures and barns are located, and back.

” – What does it mean siripit?
– You collect the hay and, if rain comes, you collect it. If the sun comes out, you scatter it again (siripi). Eeeeh, this hay is tricky, it’s tricky.
– And how often do you make this trip in a week?
– Oh my! Well, if you have mowers,you come in the morning with food. You go home, you make [food], you come back at noon. In the evening, you take them home. You go to sleep for a short while, if the weather is good, you stay up at night to cook, to give them food, without food, how can they work?
– And how long does this last for? All summer?
– For as long as there is hay. Hay, and after that, if you have, after-grass.June, July, august and September with after-grass, that’s how it goes … that’s our style”

In Pepenica’s barn there is already some dry hay, that has been cut the previous week. If it wasn’t for the rain, it would have dried quicker, but like this, it took longer.

” – How do you make the best hay?
– Like this one, green as you see it, if tomorrow and the day after the weather is good and it doesn’t get rained on, just like that, you put it in [the barn], just as you see it. It will be dry. Out here we used to be always done for Saint Ilie (Elijah),we were scything again the entire strip, we were making after-grass.But the weather kept us. I, for one, like it to be [of good quality] …some, no. They don’t care if it rains. When I saw, the other day, the bad weather, the rain that came again, I even cried. Do you know how it is? Like [for] people [the difference between] eating something rotten, and something good. It’s the same with the cow, you give it good [food], she gives back good [milk].”

The after-grass is tenderand nourishing and it’s fed to sheep and sometimes cow after they gave birth.

The care locals show for haymaking is intertwined with the important role that animal husbandry plays in their lives. Given that in the current economic climate, small producers have limited access to distribution markets and they are unable to compete with large agribusinesses, there are many cases when locals admit that the main reason for keeping animals is not the financial gain.

“I would have, how to say, what I need, you know, but, I don’t know, you get used to them [the animals] and you must have, I mean, you have a lot of land, you can’t leave it unmowed. Because if one year I don’t scythe, the next one, it becomes bosky.You can’t mow it anymore. That’s us, for as long as it lasts, because I don’t know if our children will make hay, if they will do. Youth these days is not really interested in animals.” (Gheorghe Gârțu, Moieciu de Sus).

Rather, animals are important to the locals because of their identity overtones – in other words, rearing animals, an activity that has structured their entire existence, makes them who they are.

Even if thescythingof pastures has been a constant in the life of communities in the area, the way this activity is organised and the tools employed have not remained unchanged. In some households, the scythe has been replaced with the electric mower.

What does remain is the reference to a “cositor”[1] (mower) as a unit for measuring land surface. A strip of land of 5 cositori(mowers)is represented by the surface of pasture that can be scythed by 5 people in a day. Naturally, this assessment depends on the mastery and skills of the mower, as well as on the type of relation he has with the land he is working: a pasture that is seen be its owner as measuring 5 cositori,might be evaluatedby a day labourer to 10 or more cositori. Considering that the pay for a scything day is 120 lei, with a meal included, the cost of haymaking can be quite high, so using an electric mower can be a good way to save both time, and money:

“Before, we used to scythe. There was no electric mower. Nobody heardof electric mowers. We used to scythe, look, the scythes, I have one over there, I have more in my garage. But now I’ve got an electric mower, if this came out, it makes the work easier, you know, you go with the electric mower. Andy you have… for instance, if you have a spot for 5 cositori…what does it mean 5 cositori? 5 cositori a day. With the electric mower you finish in 3 hours, 4 hours. If you have a good mower. Let’s say…. one cositor,one hour. One cositorfor one day, with the electric mower you finish in an hour. This i show it goes, one hour, one cositor, if you have a good mower. If not… I’ve seen small ones, they look like toys. With a cutter… mine has one of 1 meter 50. With a big engine, I bought it now some helping wheels, it doesn’t slide away, because it can slip away from the furrow, it slides. So I got those that stick into the ground, they don’t let it slide anymore. They keep it straight, so it goes on track.” (Gheorghe Gârțu, Moieciu de Sus)

[1]Noun referring to a person that cuts the grass with the scythe, derived from the verb “a cosi”– to scythe, that would translate as “schyther”.