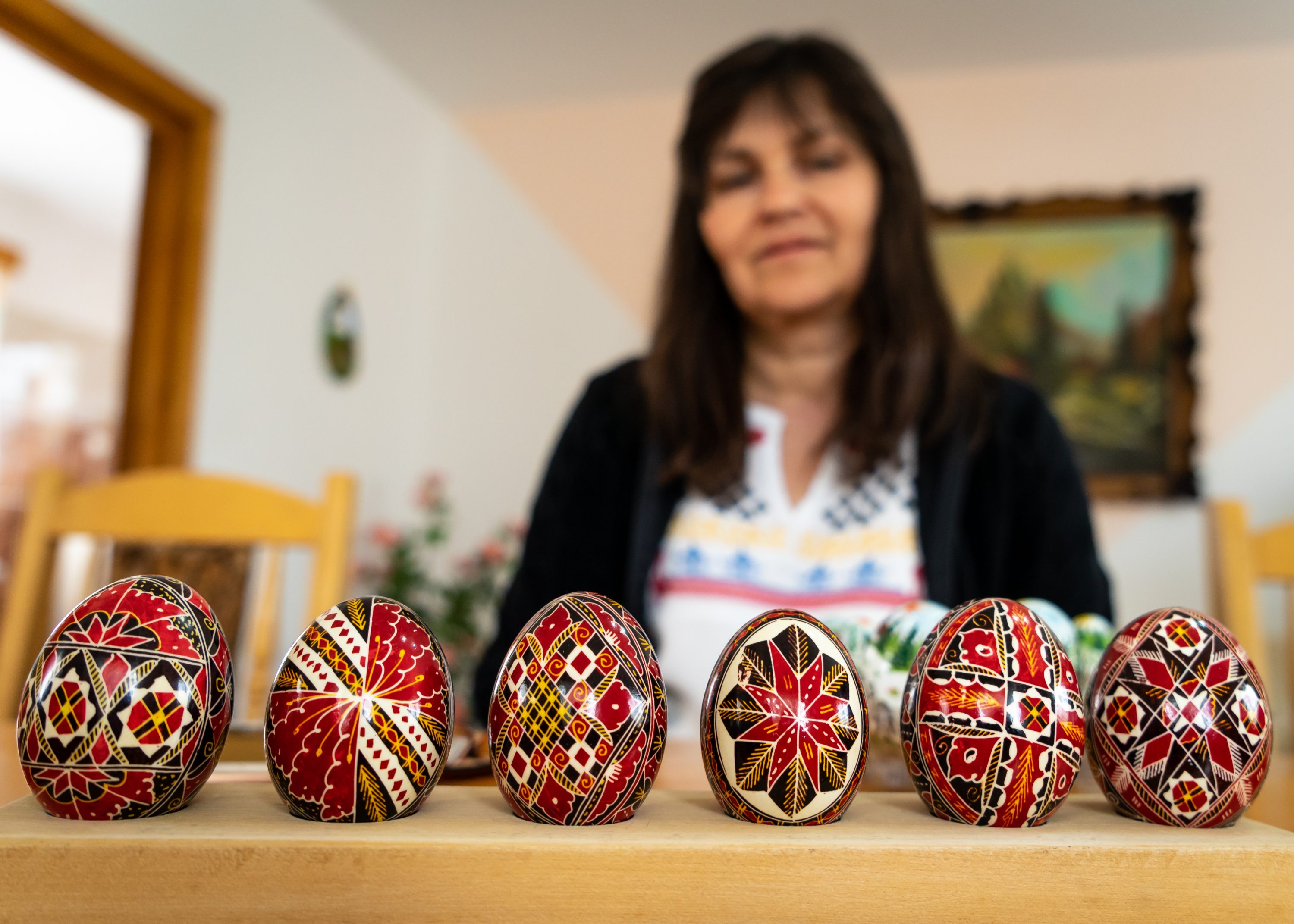 In Bran, Nina Ghinea has been painting eggs for 45 years. She began to paint during her childhood under the guidance of her mother and grandmother, gradually perfecting her skills in a craft for which this area is famous all over Romania (in their monograph of this area, Stoica and Moraru (1981)[1] point out that the craft is of an ancient, pre-Christian origin, the oldest motifs, such as the sun, the reel and the tree of life, demonstrating its connection to the celebration of the spring equinox; although this craft is practiced throughout the country, Bran is a traditional center of excellence, the craft developing much towards the end of the nineteenth century; in the first part of the 20th century, Bran had been exported painted eggs in Western Europe and the United States of America; to this day it has remained a craft practiced by many locals, especially women).

The painting of eggs involves working with beeswax, colours, either plant-derived dyes or artificial dyes, and special pens of various sizes, with the help of which thicker or thinner lines can be drawn on the shell (the pen is actually a thin wood stick with a tiny copper funnel attached at one of its ends through which hot wax drips). It takes a few hours of work to delicately pain an egg.

From her grandmother, Nina learned a painting technique that she describes today as “the old technique”: first she empties the egg with a drill and a pump, usually hen and duck eggs (in her grandmother’s time, she says, the eggs were not empty of content); then she washes, cleans the egg with vinegar and dries it; she chooses the model according to the size of the egg; then she traces the contours of this model with beeswax blackened through burning, thus covering the spaces which in the final pattern are to remain white; she sinks the egg into liquid yellow paint, removes it and dries it, and then applies another layer of wax over the spaces that will later be yellow; depending on how many colours she uses to decorate the egg, she will have to repeat this sequence of operations for each colour; the important rule is the gradual passage from the lighter to the darkest colours, black being usually the last colour in which she sinks the egg. The palette most commonly used for traditional models includes red, yellow, white and black. The last two operations are the warming the egg to a flame to remove the wax and varnishing it.

When she paints the eggs using the “new technique” that she learnt in Germany, the first steps are the same: she empties the content of the egg, then she washes it, cleans it with vinegar and dries it; she chooses the model; she draws the contours with black wax and colours it with colorful wax in a wide range of nuances; at the end, she no longer removes the wax from the egg, but it polishes it.

Nina has added her own models to the traditional repertoire of geometric, zoomorphic and floral motifs. An order she received when attending an exhibition at the Berlin Village Museum – a visitor to the museum asked her to paint his pig Maximilian on the egg – inspired her to create eggs covered with scenes from rural life, from mowing, digging and animal care and the spinning of wool. “Then I had this idea, <How about painting an oxcart?> My dad worked with the oxen, he was a forest worker and worked in the woods. The model proved to be a huge success. I have done hundreds of copies since then.” Nina’s drawings present the village’s daily life, the real-life as she experiences and the imagined life, as she envisions it starting from family stories and childhood memories.