Harvesting berries and the preparation of syrups, preserves and jams 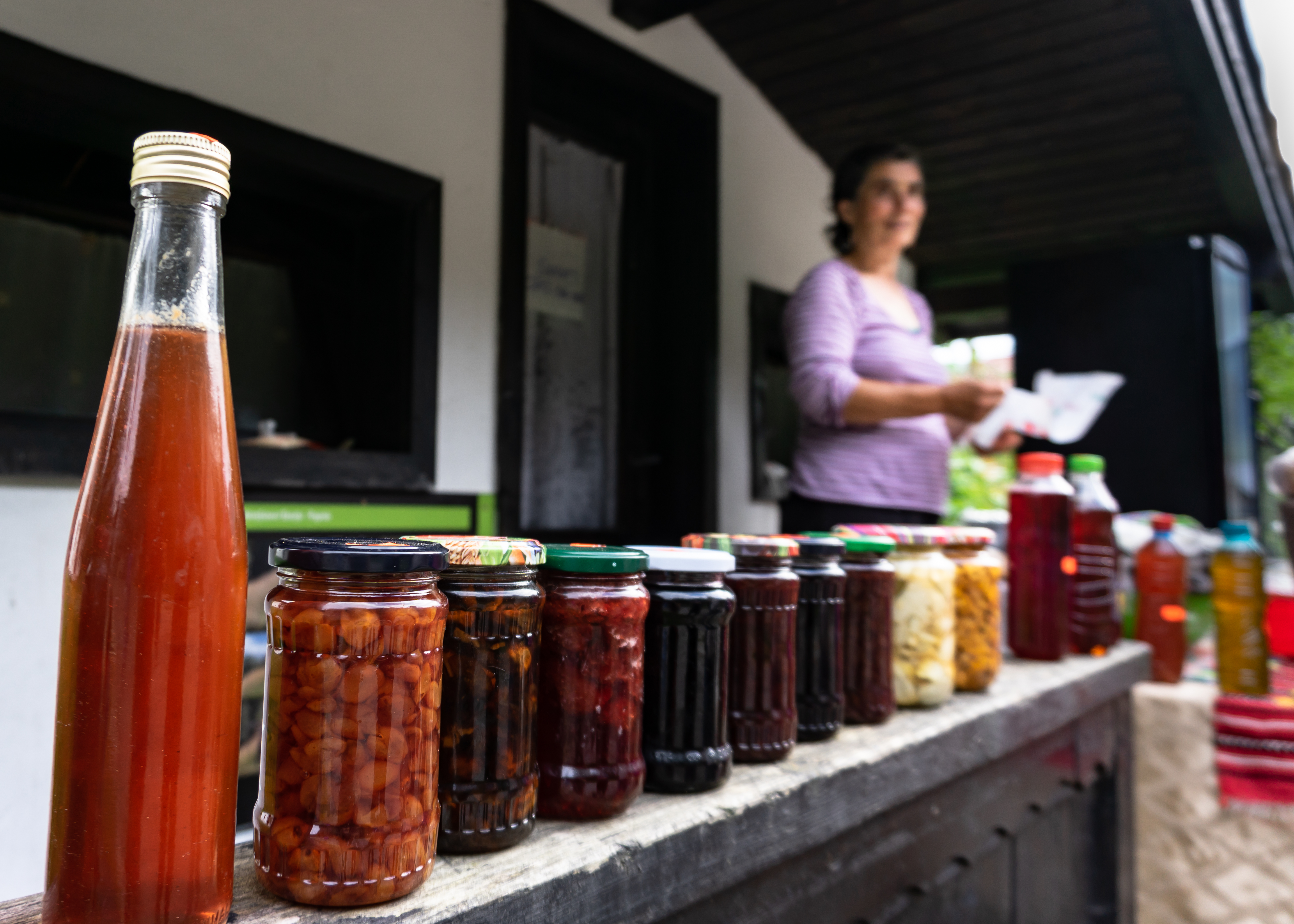 The harvest of fruits from the forest is an activity perceived by the inhabitants of the Bran-Moieciu area as a means of diversifying what they produce in their households, or of supplementing their incomes, if what they collect is used for commercial purposes.

Georgeta Popoiu, from Moieciu de Sus, gathers raspberries, brandy, rosewood, fir buds and blueberries, the picking season stretching for several months, from July to September or October.  “It takes us 2-3 hours to get there. It can happen that we find something or that we don’t. Most of the time, we look for forest fruits when we take the animals grazing in Poiana Guțanu.” When they get to places where she knows that there are some fruit bushes, she stops and starts picking. Depending on her luck she might find between 1 and 2-3 kilos a day. Wild strawberries are the most difficult to harvest and usually she cannot collect more than 2 or 3 kilos per season. Fir tree buds, on the other hand, have the shortest season – they are to be harvested at the end of May – early June, as already later they are no longer good to use. Georgeta explains that with the fruits they harvest they prepare syrups, preserves and jams. “We make some for ourselves and then the rest we put on sale.” They also make jams from the cherries and sour cherries they have in their own garden. Usually they make around 20-30 jars of a kind, from which half are to be kept for their household’s consumption, while the other half is for sale.  The products are sold to tourists throughout the fruit picking season, and until December when usually the whole batch is already sold out. Asked what is the most difficult to prepare of their products Georgeta replies: “All  of them are quite laborious. Harvesting the fruits in the forest is more difficult. On the other hand, cherries for example are easier to pick, but harder to prepare as you have to remove the kernels. But if you do everything with love, if you put yourself in what you’re doing, then everything will succeed”.

Laurențiu Tișcă from Moieciu de Sus recalls that as a young child, along with his own family, they were going harvesting in the forests around the village, coming back from these expeditions with raspberries, blueberries, blackberries, fir tree buds or Rhododendron myrtifolium, a plant called locally the mountain peony. As an adult, during the communist times, he began to use the activity of berry picking in order to earn his living, selling in the markets of Râşnov and Braşov the fresh fruits he harvested. Today he is still engaged in the preparation of syrups and jams ,using the berries he himself collected together with his wife, which he then sells in a truck in front of their house. He sells syrups made of raspberries, blueberries, fir cones, mountain peonies and dandelion.  Dandelion syrup is good especially for stomach problems, but Mr Tișcă also considers that the fir tree  syrup or  the mountain peonies one can be used as natural medicine. The recipe for making the syrup is rather simple: the fruits are washed, boiled, then drained and gently squeezed and then boiled again with sugar and honey this second time in order to become mushy.

In the communist period, forest fruits were collected in an institutionalized manner, at the barrels, as people were calling the practice locally, and everything was handed over to the state. Those who undertook this kind of work could walk even tens of kilometres over the nearby mountains in order to fulfil the quotas required by the collection centre. On the contrary, today there is no outlet for selling forest fruits and those involved in this practice have to sell their products on their own. However, whether the fruits are harvested from the forest, or they are from local orchards – where no chemicals or pesticides are used, the great advantage of the syrups, jams and preserves prepared by the inhabitants of Bran-Moieciu is the fact that they are 100% natural, produced without preservatives, as gifted from mother nature, as Mr. Tișcă likes to point out.

First prepare a syrup of water and sugar. To one litre of water add half a kilo of sugar. Remove the kernels from the sour cherries and boil them in the already made syrup until everything thickens.

First, plums need to be cleaned, have their kernels removed, and then boiled with very little water because they will leave their own juice. Boil them twice. The first time until the juice begins to thicken. The second time sugar should be added, and they should be boiled for more than an hour, until everything thickens well and a spoon will stay straight in the pot. Then add a little cinnamon and put everything in jars. Put the unsealed jars in the oven when it is still hot, but turned off, until the jam gets a crust on top. This way it could keep for up to two years. After being removed from the oven, the jars should be closed with a lid and sealed.

Plums with walnuts preserve from Aurelia Iosif’s childhood in Poarta

“They would put the plums in water with clean lime, so the fruits would leave their own water.  And then, in that water plums were pruned and peeled. If you do it like this, the whole process is very easy. They would remove the kernel with a needle or a thin stick so not to tear the plum. And in its place would put a freshly peeled walnut. And then a regular syrup was made and the stuffed plums were put there to boil for a bit. When the syrup was almost gooey, it was ready.”

“In our area, we mostly made plum nectar. It was made of that kind of variety of sweet plums, which were hard to have their flesh removed from the kernel. They would put them to boil in a cast-iron pot. Afterwards they would take them through the soup sieve until only the kernels and the flesh would remain at the surface. The plums would be boiled a bit more, so they would catch the smell of being smoked. Just a little, not too much. Sugar would be added not in large quantities, as those were sweet plums. And that’s about that. This was the nectar. The one most often made in our area.”