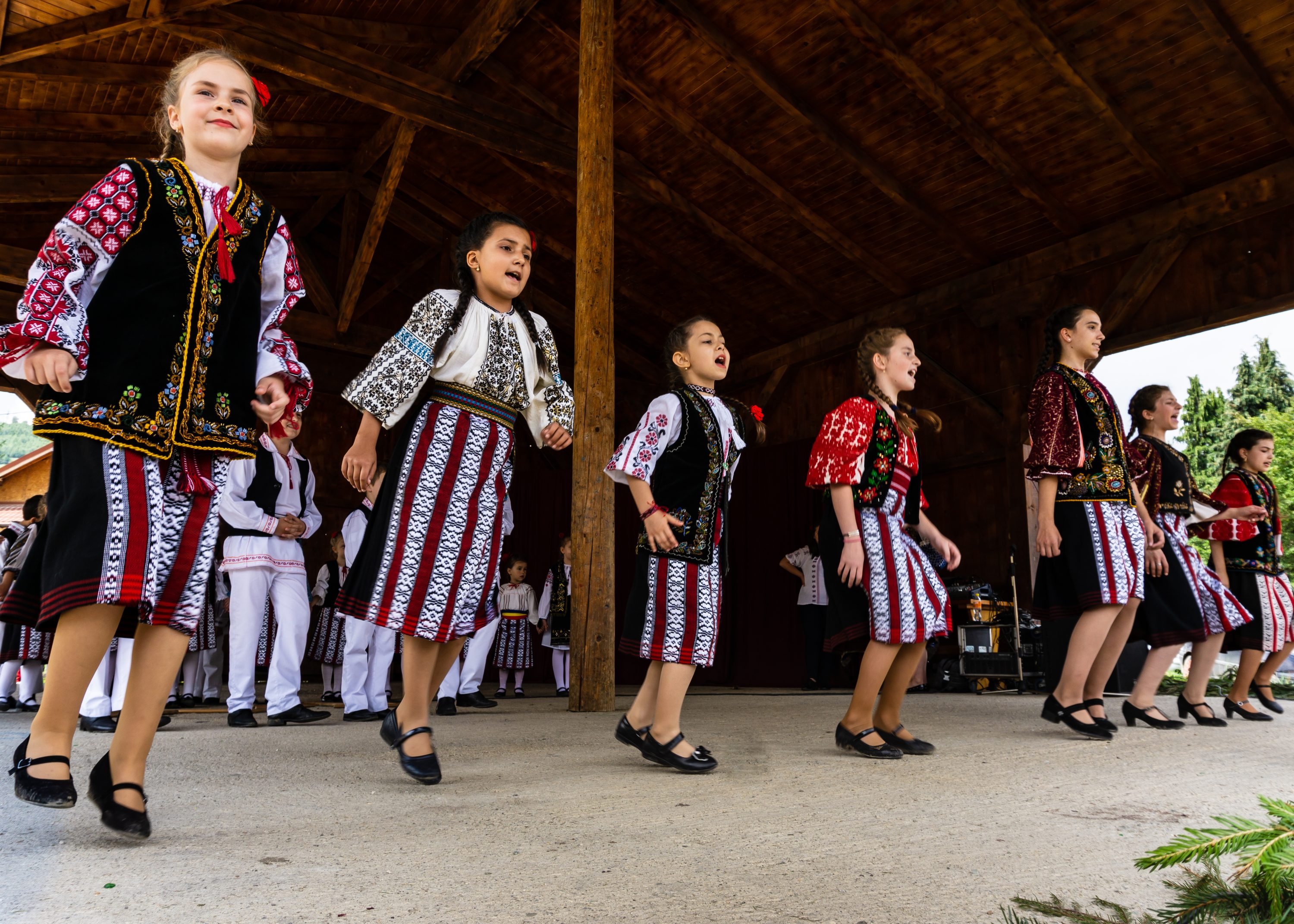 Dance is one of the most expressive elements of the cultural identity of Bran. The practice of traditional dances is a form of reproduction of cultural identity and social construction of community affiliation. By their nature, traditional dances are never done individually, but within a group, and are always intended for the community. At present, the traditional dance is no longer manifested in traditional contexts, lacking the ritual dimension and the old meanings attributed to this element of popular culture. The ritual dimension has been replaced by that of the show. Dance has a demonstrative character and turns into a consumer practice. The social and cultural functionality of traditional dance has been replaced with the care for its form, with the preoccupation for technical interpretation in front of the spectators. This type of scenic valorization is an effective mechanism for the patrimonialization of traditional dance. Knowing to dance is no longer a cultural norm, but an individual option. Today, children no longer learn to dance in the family, between friends, but especially in formal, institutionalized settings. Dance ensembles are the best example of formalizing, standardizing and uniformizing this traditional practice.

The famous traditional dances for the Bran-Moieciu area are Moiceanca, Chindia, Ciobănaşul, Sârba and, the most famous, Brâul de Bran, with the rhythm, the steps and the specific figures. These dances were ceremonial and used to be performed during the wedding ceremony, after the gathering of gifts from the guests, by the bridegroom and the bride, when the hora and other dances began. Today they are practiced on the one hand within various social events (weddings, baptisms, private parties, etc.), on the other hand, within dance ensembles trying to preserve and cultivate this cultural element: “We work with love and richer, we try to keep the tradition further, the tradition left by our ancestors through local dances. A local dance, I could say, Brâul de Bran. It’s a dance specific to our area. […] Another borrowed dance from Făgăraş area is Brâul de Făgăraş, it contains many figures, so to speak, it is a bit different from Brâul de Bran, and a small bracket, Brâul de Bran is harder than Brâul de Făgăraș. Hora, and hora is specific to our area, Breaza, Ciobănaşul and Chindia. And Chindia is also a dance from the Bran area. ” (Cătălina Ioana Stănişor, Moieciu de Jos)

An important distinction that exists in the practice of local dances relates to how they are executed according to specific social contexts. This distinction is associated with a certain tendency to fluidize the traditional rigors of instrumentalizing technical and aesthetic elements in the practice of these dances. When dancing is practiced in the public space (on the stage), a certain management of artistic impression is more important, with emphasis on elements such as the dignity, the attitude, the rigor of the performance of the dance figures. In private (or semipublic) spaces, there is a significantly greater tolerance for improvisations in execution and deviation from the standardized form of dance practice: “In the meantime, other elements have been added, each has stylized, so to speak, dances. In order to be more beautiful … There is one thing on the stage and I give you an example, at a wedding if you go, it’s different. That is, everyone dances how they have learned long time ago. On the stage you can not appear like this, it must be another greatness, you can imagine. That means everyone dances in every way. Everybody how he or she taught and … the leg is freer. Therefore, at a wedding, the foot is freer. You can do it differently. Instead, on stage, you have to have another greatness. People will laugh later: “Look at those!”

The social representations of dances are distributed along two levels: on the one hand, elements of the representation of current dance practices, in the context of the market and its representational imperatives, on the other hand, elements of the social memory of dances practiced during different historical periods. During the communism, for example, the balls represented the socio-cultural context in which traditional dances (more or less improvised versions) were practiced by community members. These were usually held in the context of winter holidays. Ana Colţea, from Măgura, remembers that during her youth in the 50s and 60s, both in the Sundays and in the winter holidays, all the village “went to dance” at the balls organized at the community center or in halls specially arranged for this purpose.

Winter was the balls season, says Aurelia Iosif from Poarta: “I could not wait for the winter holidays to come. For the New Year, for Christmas, for Bobotează. We were going to the godparents and from there we were all going to the ball. […] There was a ballroom and there was… and we were all getting together. One came with pie, the other came with wine bottles. And there they were dancing until morning”. Sârba, Breaza, Brâul, Ciobanaşul and Hora were danced most often. Brâul de Bran had several versions: “The old Brâu. Brâul  seven. […] The old Brâu had a specific step with a lame. And the other version was just the steps of Brâu, but faster”, explains Aurelia Iosif. Weddings represented another occasion for dancing: “Especially at the wedding, after going out of the church, thez waere making a big hora in the courtyard of the church. Everyone was dancing the hora. Thez came with the musicians to the church and there everyone was dancing… the bride’s hora was called”. These fragments of social memory reflect the predominant social functionality of dances in community life (communication, sociability, cohesion, mutual help etc.).

The practice of traditional dance is socialized today within local education institutions. Teachers are important promoters of this cultural practice, constantly cultivating – in institutional settings – the preoccupation, interest and enthusiasm for the transmission of this element of local cultural heritage. Local dance ensembles are relevant in this respect. The most famous in the area are the Folk Ensemble ”Românaşul”, ”Plaiuri Moiecene” and ”Zestrea Branului”. The Folk Ensemble ”Românaşul”, set up in 2014, is coordinated by Cătălina Ioana Stănişor.

The instructor of the ensemble, in turn, learned the traditional dances during the general school, inspired by her coordinating teachers to pursue the tradition of local dance: “As I continue this tradition, so I was inspired by other coordinating teachers. I learned to dance from the general school, and in my turn, I thought it would be great to be able to carry on what I know”. From an institutional point of view, the ensemble organizes its activities within Moieciu de Jos City Hall and has 50 members, aged between 4 and 17, coming from the Bran-Moieciu-Fundata area. The selection process is carried out along the activities within the ensemble: “I did not make a selection. Why? I love the kids very much and I gave a chance to every one. We will see, if you manage, you’ll see that you do, if you can not do it, you’ll give up alone and then you’ll realize it’s not for you. Not everyone is musical. And then it’s a lot harder to go with them”. Such ensembles are also an alternative socializing agent for children and adolescents, offering them attractive frames for the social experiences that this practice implies: dance, sociability, mobility, social prestige etc. “Whoever was stable, who liked what he did, remained. Not for money, not for anything else. They are very fascinated by the fact that they always go in different locations where we are called, I have seen they like it on the stage, even if they get emotional and actually like the costume, becuase if you do not like something, you do not dress and do not appear anywhere. And they like to dance. I create them a climate and a pleasant and friendly environment, I have told them, we are not at school, I do not ask … constructively, if I ask you, we do not… we have another freedom and then I attract them”.

The members of the ensemble travel frequently, participating in cultural and artistic events where they perform local dances. Motivating and maintaining their interest and passion for traditional dance is not easy to accomplish, as the ensemble instructor explains: “I try to take them anywhere, I try to give them everything I can, not to take from them. It is a very important thing and I really want to say it everywhere I go: I do not take, I want to give, I want to offer something to them, to motivate them, to stimulate them to go on because subsequently they give up, they grow up, they have their needs and then, if I do not give anything to the children, they will not come again. Therefore, I have 50…”

One of the annual local events attended by this ensemble is the “Moieciu Days”, usually organized during the summer. Dances are performed in the presence of the visitors of the fair, residents of Moieciu and other localities. Such elements of cultural consumption contribute in increasing knowledge of local specificity, functioning as a largely commodified symbolic structure that reproduces more or less faithfully the feeling of community unity, belonging and cohesion. For many children, this cultural experience is important because it gives them the context to positively define their resources, aspirations and expectations. The dance ensemble membership is an important resource of social prestige for both children and their families within the community.