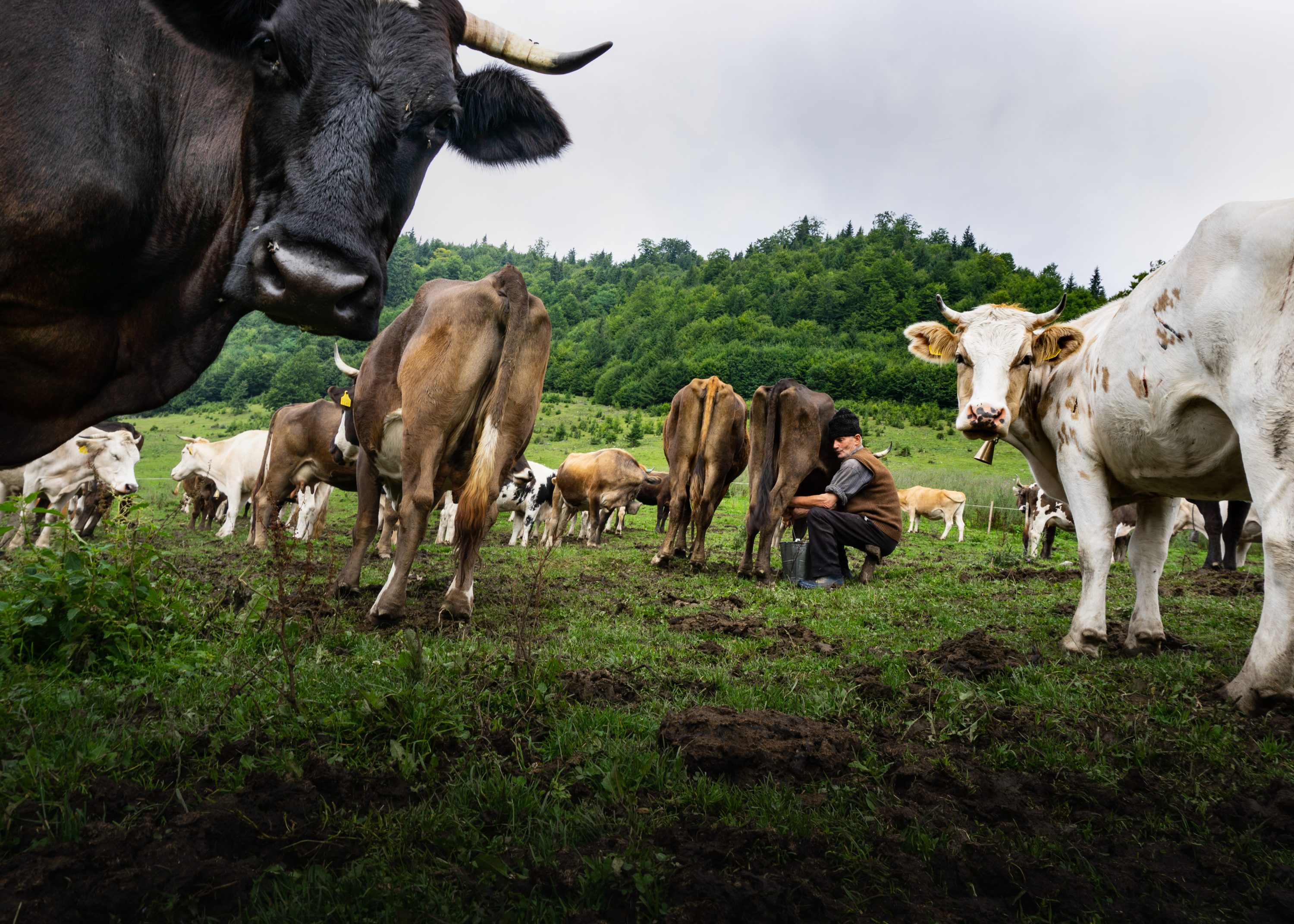 Cattle breeding is a defining practice for Bran-Moieciu area and is a determinant element of the mountain landscape. Usually cattle are not kept in the household during the summer, and sometimes nor during the winter. These are send “in the mountains”, “in the sheepfolds”, in the care of the “mountain masters”, those who organize and coordinate the work at the sheephold, have the responsibility to take care of the animals during fixed periods of time (usually during the grazing period, in the summer) and negotiates the terms of sharing dairy products with the animal owners.

Moving cattle to grazing areas and bringing them back to owners’ households are two crucial moments in the temporal economy of this practice. The chronological movement of herds throughout a seasonal cycle is precise as follows: on June 1st, cattle are taken in the mountains and on October 1st or later are brought back to the households. During the summer grazing there is an important moment – a defining element for the pastoral culture economy – the “milk measure”. This is a specific practice of  cattle breeding and refers to one milking for one cow in a single day – a morning mulking and an evening milking – for the entire grazing period on the mountain. Depending on the number of kilograms of milk resulting from this milking, the quantity of dairy products that the owner of the cattle will receive for the entire period is established. For example, if from one milking resulted in a quantity of 7 kg of milk, the owner will receive 6 kg of cheese and 1 kg of urdă. The quantity obtained (7 kg) is multiplied by 6 and results in the total amount of cheese that the owner will receive for the entire grazing period, namely 42 kg of cheese and 6 kg of urdă per beef head.

In order to simplify the moving of the animals for milking and sleeping from one place to another (in order to avoid the destruction of the pasture by excessive mudding), and to reduce the risk of attacks of wild animals (bears, wolves), the practice of using electric fences with te help of which the cattle are kept in a controlled, safe perimeter, became very popular. The electric fence is considered to be very useful by locals and it represents the material object that delimits the traditional tools of animal husbandry and care from the modern instruments, which implies an important reconfiguration of the nature of some of the work activities, on the one hand, and of the perception of working time and work efficiency, on the other. The electric fence also recalibrates livestock breeders’ perception of the relationship between domestic and wild, implicitly involving another type of risk culture associated with this occupation.

The availability and accessibility of food resources (grass, hay) are factors that influence the management of work activities, on the one hand, and of the mountain landscape, on the other. As transhumance is no longer a common practice, the sustainable management of pastures becomes a necessity, and the electric fence appears to contribute significantly to this process. It is important, for example, that cows do not go too much in order to get to the grazing area. The word used by locals to denote the fact that cattle have to go a too long distance to graze is “treapă”. Typically, the cows at a sheepfold go about. 3-4 kilometers to the grazing plot, a distance that they go twice a day, in the morning and in the evening when they return to the sheepfold. The land included within the sheepfold area is divided into grazing plots, used alternately in order to provide permanent fresh grass for the cattle. The plot is changed once every 2-3 days by moving the herd to another plot. The movement of cattle is supervised by shepherds who take care of them throughout the entire day/grazing period.

For the winter, the animals are brought back to the owners’ households. The hay gathered over the summer is the main food for cattle during the winter. The animals are kept in “barns”, in “rooms” which are provided with an attic where the hay made during the summer is deposited (the first hay and the second hay, the latter called otava) and a space destined for the cows or sheep. The attic is provided with a hatch through which the hay is climbed into the aatic, respectively got out of it to feed the cattle. The hay is set in stalls specially designed for cattle feeding. The period during which the cattle are in the household during winter is called wintering. During wintering, the cattle always have stables separate from those of the sheep. One of the reasons is that the cattle can “tread” the sheep, hit them, especially those that are “worse”. In the case of those who leave the cattle in the ”rooms” far away from the household, the work activities are organized according to a program just as precise: “During the winter we come in the morning, in the morning, we take out the garbage, we give them hay, we milk the cows, we go down the valley. In the evening, at about 3, 4, we go back. That’s what we do. In the morning again”. (Maria Pepene, Moieciu de Sus)

Cattle breeding involves a wide range of activities distributed over the year. Even when the cattle are not kept in the household during the 4 months of summer (June, July, August, September), there are other activities to be done in order to provide them with the necessary care conditions for the winter. Mowing is one of them: “In the summer is easier because you take them to the mountains. But in the summer you make the hay. You’re making the hay, you still do not stay without doing anything. The hay and the second mowing. As we say, otava. That otava you give them after having a litter. When they make milk”.

Regarding the ways of cattle procurement, the most widespread practice is “from cow to cow”, “every man prăsește“. After the calves have been born, the cow may be sold or kept. If, for example, the owner likes the color of the cow or is a “good for milk” cow (she produces an important amount of milk, 7-10 liters), then he will keep her. Otherwise, the calves are kept and the necessary quantity of cattle is reproduced. Are rather rare the situations when cows are bought. This happens, for example, when the cattle become sick or are eaten by bears: “Well, I keep them from one another. From cow to cow. From animal to animal. For example, let’s say, she calf in spring and you like her color or is a cow good for mișk and if you want to keep it, you keep it, you do not give it. Time ago, you were not allowed to cut the calves, but now you cut them. Every man prăsește. Prăsește himself, he does not buy. Prăsește sheep, cow. Well, God forbid, if it happens, well, in the mountains that she is eaten by the bear or she gets sick to die, then you have to buy. However, you do not buy a cow that does not yield, you buy a good cow. You do not want to keep her, to make hay with a cow that does not have… 2-3 kilos of milk, 5 kilos”.

The size of the properties held in the area plays an important role in the overall economy of this occupation. The magnitude of agricultural land in the possession of locals is directly proportional to the willingness to raise animals. Rationality is a practical one: land can not be left unworked. As a local from Moieciu de Sus, Gheorghe Gârţu, explains: “… you have many lands, you can not leave them unmowed. That if I do not mow it for a year, the second one it is afflicted. You can not mow it anymore”. He states that “it is a pity to let the terrain to let go of it, to let him unmowed”. Moreover, the way in which locals relate to livestock practices, including working the land to which they are closely linked, also indicates a certain type of perception of social value of labor and the role it plays in the construction of social prestige in the belonging community.

An important dimension of cattle breeding is the perception of the animals. This is strongly humanizing. The cows are highly personalized, invested with human attributes, with personality traits: “The one who is more courageous, the others are afraid of her, is like the captain. That one spotted is the worst when pushing. They push one another, like people. There are smarter animals that are more sly when it comes to food. They only like as a whole. I mean, here it has sharpened and they want to eat from around there, but there is not not my grazing area, it’s not my land. And I can not let them. They get away sometimes, get away, that is it, well… But in any case, we’re quiet and that is it. Well, the terrain streches out there, till the edge. The livid ones are smaller in stature, mountain cows. These are brindled cows, that livid one with the white head is metis. We in our area do not keep holstein, black with white, that’s too cold here in our area, and they are more sensitive, those ones to the field. And it’s also that they are more cumbersome, those ones to the field, in the lowlands. These are sprier”. (Ion Pepene, Şimon, Bran)

The sensitivity to animal needs and the responsibility of locals manifested in the typical livestock raising activities structure a real ethics of care that is at the same time an important environmental ethics. Cattle breeders sometimes go at night, during the winter, at the ”rooms” situated at relatively large distances from homes in order to give them the necessary care: “I came many times at 12 o’clock at night when I saw that she wanted to calf, because you were afraid to leave her alone. And I came and sat untill dawn. I went down to get water, to bring warm water from home”. The affective dimension is important in the way people define their relationship with the animals they grow and care for: “They are ladies, we are… They are ladies, the cows. […] That you see, I did not get into the stable without saying “My dears! What do you do, my dears?” I carresed them, and you see, because the cow too, she just does not have a voice…” (Maria Pepene, Moieciu de Sus).

Cattle breeeding as the main traditional work activity in the area is an essential component of their social identity. This basic occupation has an important economic dimension and remains a way of life for a significant part of the local population: “It was before… you had no other source of income, another source of income but from the animals. You had to keep. Now you have a guest house, you have a business or something, the money comes out from elsewhere, you know. These I keep, sheep, cow, these, I got used to them and without them, is just like I do not know, like you have no leg or no… I do not know how to say, how to express myself, you know”. (Gheorghe Gârţu, Moieciu de Sus)