Traditional winter customs – The goat dance and other carols 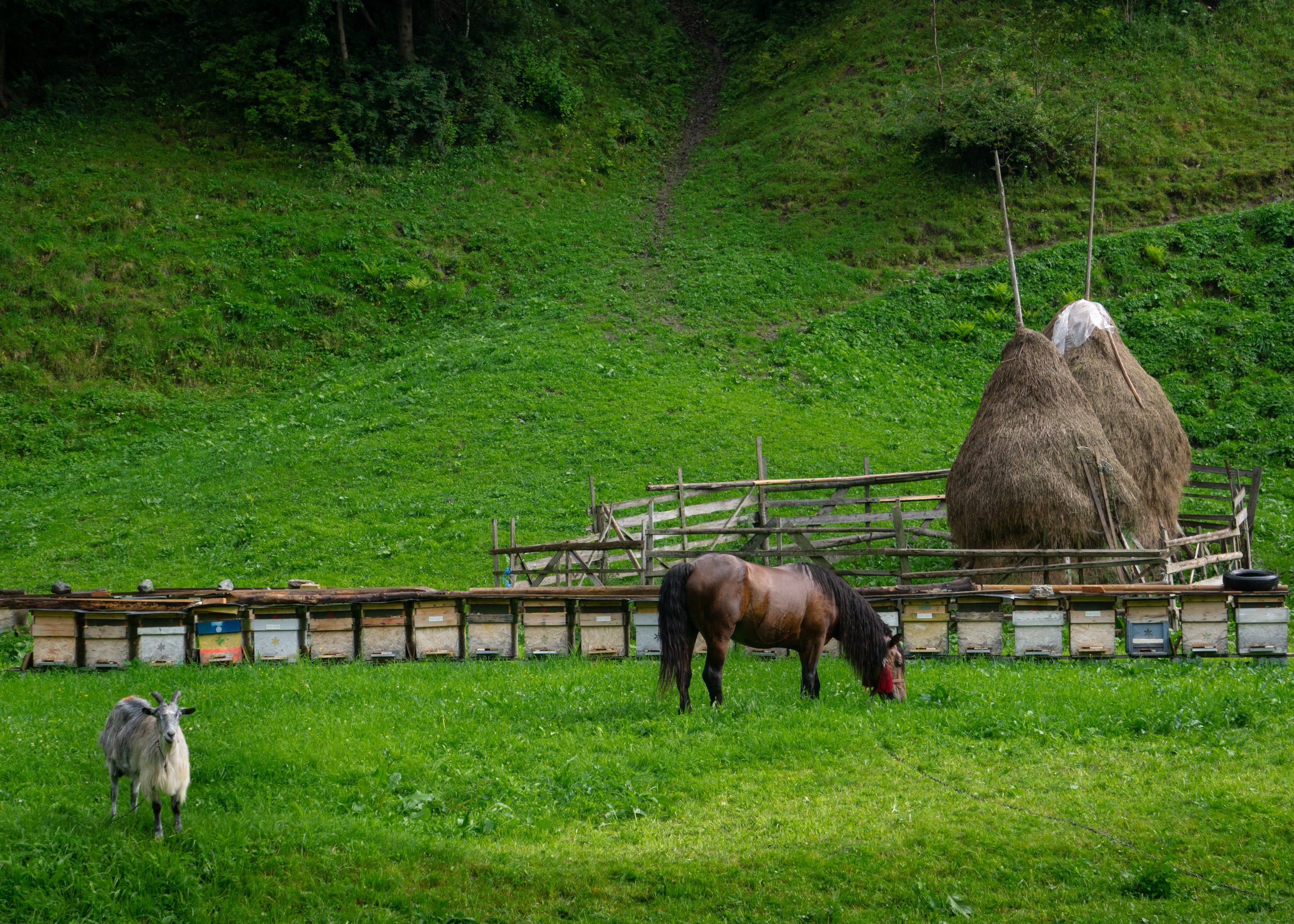 From the repertoire of winter customs that take the form of bountiful wishes, one of the most spectacular is the Capra (the Goat Dance). It’s a New Year custom. The material element specific to the props of this custom is the goat mask. Originally it was used a goat head made of wood and covered with wild goatskin. The foot of the goat was made in such a way that it was clinging to its action with a string by the boy playing the goat. The group (ceata) was made up of 5 boys, each with a different role in caroling. In this short play, one played a musical instrument, usually a whistle, one was the master of the goat, two were supporting members, and one played the mask. During the carol there was a dialogue between the members of the group, in which the price of the goat was negotiated, subject to various “tests” that raised the joy of the participants.

Gheorghe Gârţu, a local from Moieciu de Sus, tells about the funny situations generated by the haggling over the goat: “Well, from our ancestors we learned how to play the goat, to sell it, some sell it, some buy it, sing a whistle so that the gost know to dance. But if the goat got drunk, it stoped dancing, good luck! That’s it. There were two people who had the monologue: “Is this the goat for sale?”, “For sale!”, “How much do you ask for?”, “That much?”, “That much!”, „What else does it do?”, „Does it stay to be milked?”. He tries to milk it. You were kicking. “Well, it does not stay, you look, you demand so much, it does not stay,” and I do not know what. “What else can it do?” “Dance”. One sang from the whistle, the goat danced. […] Beautiful, it was beautiful with the goat, but no longer… “.

The wishes of the group of carolers ended with the demand for gifts (usually money). During the course of the custom various elements were improvised and increased the cheerfulness and joy of caroling. The same local joyfully remembers such improvisations: “I was doing the goat, the lower flap… […] and I was drilling a hole, at the bottom, the lower jaw, I made it like that, you know, and in the head, here where its head and your head were, with the mouth, we had a little hose where we had a hole in the goat’s head and they came to give the goat to drink. Understand? And it came into your mouth. That is, the goat, the goat itself, you kept the little hose in your mouth, you drank. You know? There were, for example, foreigns of these: “Let’s give the goat a drink!” They gave the goat a drink. You drank, that in the end… they did not give the drink to those who did the song, they would give you the drink, to the goat, you drank, and then you let it flow down because you were getting drunk and doing your best. You know? That you were pulling the hose out, you gave it away. It was a tiny hose that… but no longer… “. The winter custom of the Goat dance has been preserved, but it is no longer practiced in the old version. On the one hand, there is no group in the form described above, on the other hand the goat mask is no longer made of traditional materials (wood, wild goatskin, goat horns). Traditional musical instruments used in the past (especially the whistle) have been replaced by modern musical instruments (accordion, saxophone).

Another important dynamic concerns the origin of the carolers. In recent years, those who practice the Goat dance are no longer locals, but inhabitants from other villages, neighbors or more distant, indicating an alteration of the social functionality of the custom at the community level. Elements of this dynamics of practicing winter customs are outlined with vague nostalgic nuances by Gheorghe Gârţu: “There are customs, but they are not like they were before. They are, but … so many children to be. Look, for example, let’s say for Christmas, with the caroling, with these, you know. Well, we’d go caroling, we’d go up until late at night. Now they go to a house, two, to the relatives more, go to that, go to that, and that’s it. But we were going, we were all night, there were only children on the road, with caroling, the Goat, Plugușorul, and caroling again. For Christmas, with the Star. Well, the went with the Star, they sang with the Star. And now I’ve got the Star since I was a kid. And the goat the same. I have a goat’s foot with horns, with all the miracles. They’re small ones, of goat, I have some little horns, some with panoply. The star and the goat. Well, with the goat before, we were very many. […] I covered the head with goatskin. Wild goat skin. Now they paint a little bit, put I don’t know what, and that is it. For example, one year ago, I did not see anyone with the Goat. From our village. There are gypsies from Moroeni who come, from the other side. These guys come, but there is nobody from the locals. They come from somewhere else, with caroling, with accordions, with saxophones, with… […] For the New Year, then you go with the Goat. New Year’s Eve, when is New Year’s Eve. Then you go with Goat and with Plugușorul you go in the evening. With Plugușorul and Goat in the same evening. And the day before you go with the caroling. […] They carols: New Year comes/We wish you well/Well with health/And good luck with everything! Of these. We say Well you live/Happy New Year! That’s caroling. [What the carolers received] Yes, money. Only money. But here. In other places I do not know, donuts, apples, pears, nuts. No money is given except with Christmas Good Morning. So then there’s no money. It’s all these, sweets, cocoa cream biscuits, cakes, all of these nuts. Previously, there were nuts, apples, what people had. Now, they give these, cakes, there is competition: what gave you at that house? Well, he gave me this… Ah, he is a rich man, he had no money to buy to give you… You know?”